We carry a fairly diverse range of gauges.

Click here for the entire Mortise and Marking Gauge department

Some basic terminology about marking gauges:

A marking gauge has a fence that can be moved and locked along a beam. There is a single pin to scribe one line. It is used primarily for scribing tenons and dovetail shoulder lines, and occasionally to mark out a rabbet. The pin is fixed and the fence slides to the correct location on the beam and then is locked in place. There are dozens of mechanisms for locking the fence on the beam, some using a captured wedge but more likely some sort of thumbscrew.

A mortise gauge has 2 pins to scribe both sides of a mortise simultaneously. Some mortise gauges, called combination mortise gauges, have single pin on the other side so you can use it as a regular marking gauge, and other types allow you to retract one pin into the fence, for the same reason. If you have trouble getting both pins to scribe evenly, check that both pins are at the same height. If they aren't, file one down slightly. Depending on the design, the movable pin is adjusted by means of a slider or a screw adjuster. The advantage of the screw adjuster is that the movable pin will stay put, independent of later fence adjustments. However, this convenience comes at a greater cost and complexity of mechanism.

(Note: we typically carry many different styles of the same gauge with different features at different prices. The gauge illustrated and linked at left is just one specific mortise gauge that we are using to illustrate the genre.)

A cutting gauge is a marking gauge with a knife instead of a pin. Basically, the theory behind this distinction is that cutting across grain with a knife is better than using a pin. Since the pin must be pretty sharp, I don't see much of a difference in use, although I personally I prefer the pin. Nevertheless, a cutting gauge does come in handy with delicate operations, such as dealing with veneers.

A panel gauge is basically a long marking gauge with a beam that can go from a foot to several feet long, depending on the application. A panel gauge's major use is in scribing boards to the correct width. In the old days, before table saws and accurate rip fences, after planing one edge of a board true you would use a panel gauge to scribe a parallel line for the width of the board. Then you'd saw and plane to that line. Panel gauges are also extremely handy for marking locations in the center of a panel. These days in a modern shop they aren't used much, but when you need one they can make layout much faster. 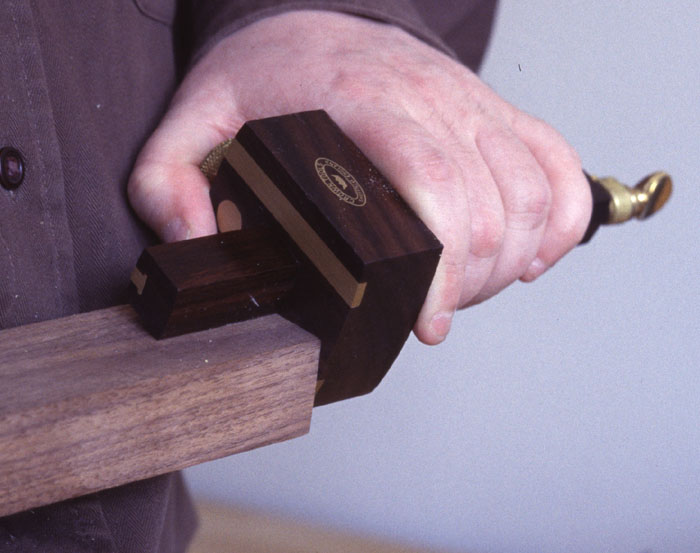 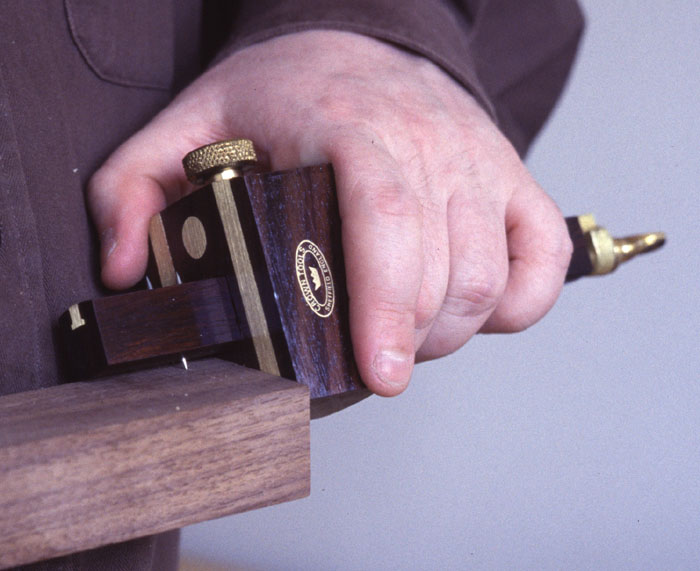 Don't run a gauge off the end or a board - this can cause splintering. Instead you should stop scribing before you reach the other end. At that point, you should start again from the other edge and meet your line in the middle (at the same setting but from the opposite direction). 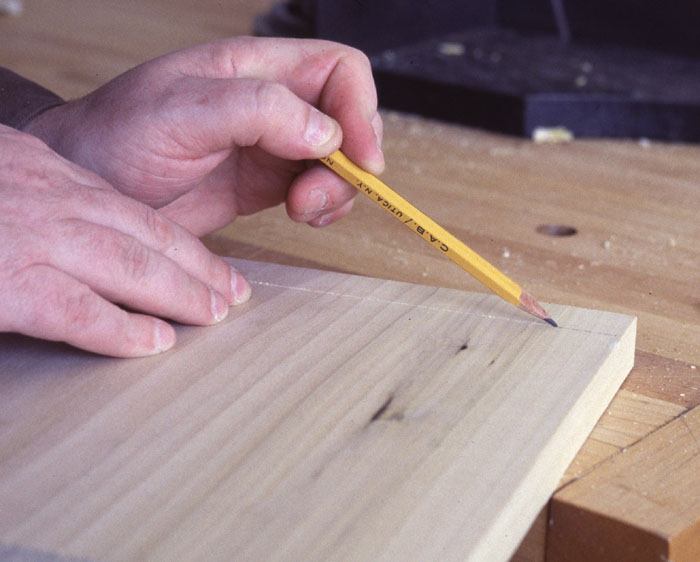 If you have trouble seeing the scribed line, take a very sharp pencil, place the point in the scribed line at a slight angle to the wood and pull it along the scribed line. Let the scribe guide the pencil. This will leave a little lead on both edges of the scribe so you can see it better. For an even finer line, you can go over the penciled (scribed) line with an eraser. What's left will be a penciled line that is very precise (you've erased the excess graphite) yet still easy to read.

Marking and mortise gauges are some of the most used measuring tools in the shop, and consequently we stock a fair selection. One of the most important concepts in woodwork is the idea of referencing measurements. It rarely matters what the exact measurement is - 0.500" as opposed to 0.560"; the important thing is that the measured parts are consistent, and the marked lines are truly parallel. So gauges are used not to set specific lengths, but rather to allow you to take measurement from one item and transfer it exactly to another, without actually needing to know the exact measurement. For example, the way to set a marking gauge for scribing a line for dovetailing is to set the gauge on one piece, with the fence on one side so that the pin just goes over the other side. Then lock the gauge. This gives you a perfect line to scribe - the exact width of the wood plus a little extra for planing the dovetails flush.

When you start out a good combination mortise gauge is the most versatile tool to have. However, as you get involved in more complicated projects, having a bunch of gauges whose settings you can maintain for the duration of a project is very handy. Even though a combination gauge can be used as both a mortise gauge and a marking gauge, I typically have a mortise gauge set for the mortise and stock I'm using, and a different marking gauge to hold the setting for the tenon length. This way I can go back and forth with the identical settings without worrying about tiny differences that can cause trouble. Once I set the gauge, I put masking tape over the thumbscrew as a reminder so I know it's set.

Click here for the entire mortise and marking gauge department