The Measured Drawings Of Carlyle Lynch

Discounts! Save on purchases of two of more sets of drawings. See below for details!

The late Carlyle Lynch (1909-1989) was an inspired teacher of woodwork, metalwork and drafting. He was a furniture maker and author with a lifelong passion for classic American furniture. Lynch took it upon himself to measure outstanding pieces of 18th and 19th century American furniture and to create detailed drawings so that the furniture could be reproduced by woodworkers who shared his passion. The furniture items for which Lynch prepared drawings reads like greatest hits of American furniture: Chippendale table and side chair; Hellplewhite dining and end tables; four-poster bed; Windsor chair; Queen Anne table, side chair and lowboy; Duncan Phyfe's tool chest; and many others great pieces, including beds, clocks, cupboards, desks and benches.

What I find even more remarkable that the scope of Lynch's interest is the incredible attention to detail that his drawings contain. In an introduction to his original catalog of plans, Lynch promised that, "...followed to the letter, reproductions from these plans will be remarkably like the originals, but used at guides, you can make pieces that will have the spirit of the originals but with modifications pleasing to you." What I love about his work is that it isn't watered down. Carlyle Lynch's plans capture the integrity of the pieces to a remarkable degree. If he didn't take a direct measurement, he notes the guess on the plans. Lynch's goal was to make it possible for you to build an exact replica. When contemplating a complex project like this tool chest, many woodworkers will make modifications to suit their own needs and skill levels. But it's important to start out with a design that is as authentic as possible. If I take any shortcuts (and you know I probably will) they will be my own doing, not because the measured drawings started out with compromises. 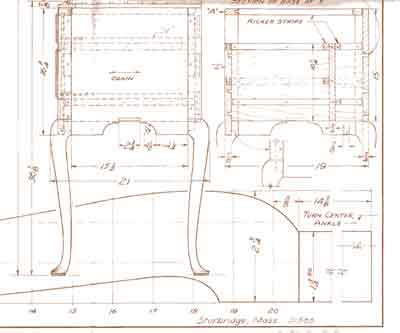 During Carlyle Lynch's lifetime, his plans were in much demand. Fine Woodworking published many of his plans, including the measured drawings of the Phyfe chest (Lynch's July 1985 piece describes some of the trials and tribulations of measuring the original chest). After Mr. Lynch passed away in 1989, his drawings became harder and harder to get. Thankfully, his granddaughter Janet Lynch made his wonderful drawings available for crafts people everywhere. We are please to offer the full complement of Carlyle Lynch's plans - about 100 masterworks in all.

Note: Lynch's plans are written in the classic style, hand drawn with complex details distilled onto a single page with details and inserts. Once you look at the plans for a little while, they will be easy to decipher. The blueprints come with a complete bill of materials with added notes on important construction details.

Left: Corner of drawing for a Highboy (c. 1750 from the collection of Old Sturbridge Village - LL-X-8)

Discounts! If you purchase two or more sets of plans, you are entitled to a discount of $1 on each set of plans. The discount is automatic and will show up as an entry in your basket.